About the Brown County WID No.1 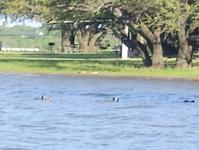 The History of Brown County Water Improvement District No. 1 and Lake Brownwood Brown County Water Improvement District No. 1 (BCWID#1) is a political subdivision of the State of Texas comprising 24,965 acres in Brown County, Texas. The District's area includes a majority of the area of the City of Brownwood (county seat of Brown County, 1994 estimated population 18,600)Estimated population of the District is 18,400 (source: the District). Originally created by the Brown County Commissioner's Court in 1926, the District was converted to a Municipal Utility District in 1978 by Texas Water Commission order under Chapter 54 of the Texas Water Code, retaining its original name and the right of eminent domain.

The District owns and operates Lake Brownwood located approximately eight miles north of the City of Brownwood on the watersheds of Pecan Bayou and Jim Ned Creek, tributaries of the Colorado River. The District furnishes the entire water supply for the Cities of Brownwood, Early, Bangs, the Brookesmith SUD, small systems around Lake Brownwood, and part of the supply for the City of Santa Anna in Coleman County.

"In March of 1927 BCWID#1 filed an application with the State Board of Water Engineers to fill a reservoir on the Pecan Bayou and its tributary, Jim Ned Creek, with 500,000 acre feet of water, and to use the water in the reservoir for municipal, industrial, and power purposes and for irrigation of 47,895 acres of land. The Board of Water Engineers, the state agency with the exclusive authority to grant permits for surface water use at that time, called a public hearing for May 31, 1927.

Between May 25 and May 31, 1927 the Board received protests against the BCWID#1 project from virtually every major water user on the lower Colorado River. Most of the protestants were rice irrigator companies in Matagorda and Colorado Counties, and also the Syndicate Power Company of Chicago, Illinois. In 1926 and 1927 the Board of Water Engineers had granted permits to Syndicate Power Company to build six dams between Austin and Burnet on the Colorado River. These permits also authorized Syndicate to put up to 1,391,530 acre feet of water per year through turbines at each of these dams to generate hydroelectric power.

All of the protestants to the BCWID#1 application claimed that their rights required all the water in the river; no water remained for Brownwood, according to their assertions. Due to the protests, the Board of Water Engineers delayed a decision and scheduled another hearing for June 22, 1927.

The delay in having its application considered surprised the Brownwood Chamber of Commerce, but its misfortune gained the attention of a large and powerful ally, the West Texas Chamber of Commerce (WTCC). The WTCC was founded in 1918 as a regional organization of local chambers of commerce. It had lobbied for the establishment of Texas Tech University, as well as for state senatorial reapportionment, appropriate railroad tariffs, flood control and irrigation surveys and equalization of state taxation. It was a large and respected organization, of which the Brownwood Chamber of Commerce was a founding and charter member.

The objections of the Syndicate Power Company to the BCWID#1 project caused the project to fit in nicely with an existing WTCC concern. In early May 1927, the resolutions committee of the WTCC had declared that it deplored "monopolistic acquisition by ...utilities or others of water powers and rights so necessary to the welfare of the people in general".

At a meeting on June 13, 1927 the executive board of the WTCC issued a resolution opposing the dedication of water for the development of hydroelectric power at the expense of the agricultural and domestic interests of the State, and urging the board to grant the BCWID#1 application. From there the fight was joined between those who supported the appropriative doctrine of water use which was the law modified by the concept that the date of first use alone determines who is entitled to use water when there is not enough water to satisfy all users, and those who believed not only the date of use, but the type of use should determine who could use water when enough water was not available.

In July 1929, the Syndicate Power Company transferred its right to Emery, Pick and Rockwood Development Company. Thus ended the Lake Brownwood water dispute, but not the controversy it had begun. The concept of water use controversy continued in the 1929 session of the legislature with bills representing both points of view being introduced but not adopted. In 1931 the Texas Legislature adopted a statute governing the use of water that has come to be known as the Wagstaff Act. The history of the Wagstaff Act shows that only municipal water rights should be allowed to impinge on all post 1931 non-municipal water rights. This interpretation gives the Wagstaff Act the importance it deserves as an intentional alteration of the doctrine of appropriative rights in order to recognize the primacy of cities' needs for water."

"On December 4, 1928 voters of the District approved the issuing of $2,500,000 General Obligation Bonds. No bonds were sold prior to the stock market crash in 1929 creating tremendous problems for the Board and their financial advisors. On November 4, 1930 a construction contract was entered into with the Standard Paving Company of Tulsa, Oklahoma (with offices in Ft. Worth, Texas) for the amount of $590,003. Specifications for the dam called for a length of 1600' and height above the Pecan Bayou of 116'. The surface area was 7200 acres and the watershed comprises 1550 square miles. Construction work began January 10, 1931. A massive flood occurred on July 3, 1932 causing the need to change plans for the outlet works but no damage was sustained by the dam which was completed early in 1933. The clearing of timber from 3000 acres of the bed of the lake in 1931 supplied work for 400 unemployed Brownwood citizens providing incomes of $3.00 to $4.00 per day. This part of the project is looked on locally as our own WPA project occurring two years prior to the inauguration of FDR.

No way was found to finance the aqueduct and irrigation laterals until 1937 when a 40% grant from Works Progress Administration and a contract with the City of Brownwood to supply the City 600,000,000 gallons of treated water annually provided the necessary funds.

In 1938-39 the District constructed a 13.5 mile concrete water supply aqueduct from the reservoir to a 4 mgd treatment plant. The aqueduct was a complete gravity flow supply. During that period the District also extended irrigation laterals to every part of the District boundaries. In 1942 the plant was expanded to 8 mgd to accommodate Camp Bowie (a WW II training facility)". In 1984 the height of the dam at Lake Brownwood was raised 20' and the mass of the dam increased by 1/3 its original composition. The dam outlet works were modified to 42" intake facilities at 17', 55' and 65' respectively below spillway level. In 1986 the old treatment plant was modified to current standards and a new 10 mgd treatment facility was constructed.

For sixty years BCWID#1 has provided municipal water of top quality, irrigation water at the capacity demanded and a recreation facility the equal of any in Texas.

FOOTNOTE: Material in quotations above taken from "Lake Brownwood and Texas Water Law" by Robin A. Melvin, published in Southwestern Historical Quarterly.